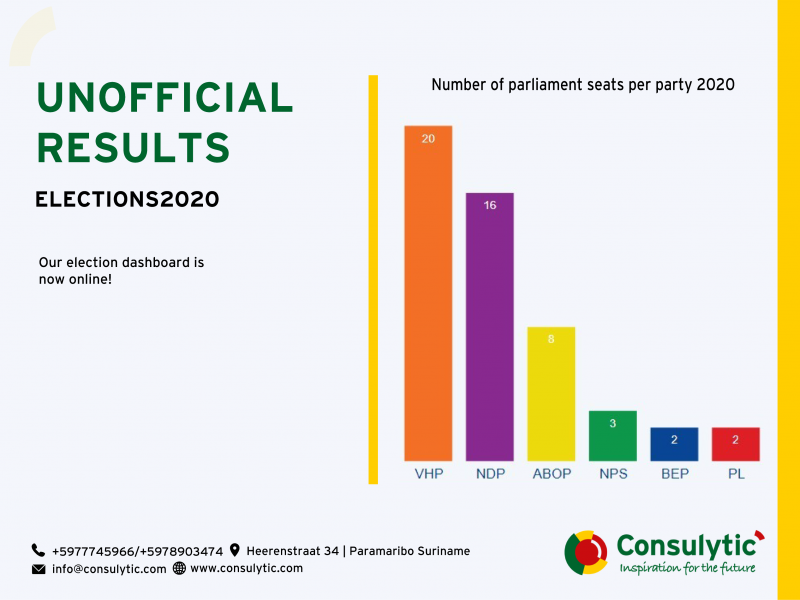 Posted at 18:38h in News by Hans van Ballegooij
Share

All results, except those of 3 polling stations in Paramaribo, have now been entered.

From the first results it is clear that it is a battle between the big traditional parties:
the NDP, VHP, NPS, ABOP, PL and BEP.

We have analyzed the voting behavior at the 3 polling stations that have yet to come in (at Pontbuiten) and predicted the following:

Can this still change?

We do not believe so. About 1480 potential votes still need to be counted at these 3 polling stations (Pontbuiten).
And even if (for example) the NDP gets all these votes, they will remain at 5 seats in Paramaribo. And the same goes for ABOP, this party remains at 2 seats in Paramaribo.

In the case of the NPS, there is still a small chance of reclaiming the lost seat. That would be at the expense of the VHP, but then they would have to get significantly more votes than the VHP, and this does not seem realistic.

Stay informed of the developments surrounding the elections via our dashboard

NOTE: These are the unofficial results based on official data obtained from the Ministry of Home Affairs.